Ever wonder why the petrochemical plants look the way they do? Or what actually goes on in there?

I sure did when I first moved down here to SETX.  So, I looked into it and came up with a rather simple explanation. Conceptually correct, but not technically accurate by any means.

These huge plants are really just Big Stills, gigantic versions of what the bootleggers used during prohibition.

A still (distillery) takes a fermented liquid called “mash”, heats it, then captures and cools the steam.  To make moonshine, mixing water with yeast creates fermentation which produces alcohol in the mash.

Alcohol has a lower boiling point than water, so the still is used to heat the mash just to the boiling point of alcohol. The alcohol rises as steam which is then cooled back to a liquid for storage in a separate container. Voila! Now we have pure alcohol.

In the world of petrochemicals, instead of a mash they have “feedstock”, for example petroleum or natural gas. This is fed into a tank and heated under pressure until the desired ingredient’s boiling point is reached. The desired ingredient rises as steam, is cooled and stored separately. Voila! We have now captured a product which we can sell.

But wait. Using what’s left of the feedstock, at different combinations of temperature and pressure, we can extract other products.

The feedstock comes to the Big Still in a pipeline. The resulting products are distributed on down the line in another pipeline.

As I said, when I moved here, I was totally ignorant of what I now know is called Process Manufacturing. What I always thought of as “manufacturing” before is really known as Discrete Manufacturing – to distinguish it from what comes out of the Big Still.

Discreet (“traditional”) Manufacturing is ADDITIVE, that is, you add things (like raw materials) together to create something new (the finished product). An example could be as simple as a picnic table, made by adding pieces of wood and fasteners together with some labor.

Process Manufacturing, on the other hand, is SUBTRACTIVE, that is, you start with something called “feedstock” (for example, crude oil) and subtract something (the finished product) from it using pressure and temperature to determine what gets subtracted. 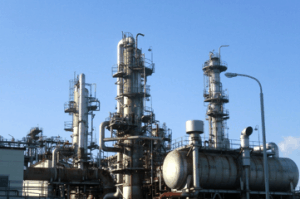 So next time you drive past a refinery or a petrochemical plant, you would be safe in saying, “It’s just a Big Still”.

Please remember that this opinion is only intended to give you a conceptual image of what goes on in these plants. From a strictly technical view, this opinion can be challenged and most likely proven wrong in many things. However, once you have read it, I hope you will understand a little better what goes on inside all these places with the towers and pipes.

This article was first published in The Orange Leader on December 11th 2019.