There’s something about the heat we’ve been experiencing that seems to affect everything, even the gas gauge in a car. Recently I was on my way to a meeting in downtown Orange late in the afternoon and ran out of gas as I crossed 16th street. I was able to glide (too nice a word, considering no power steering or brakes) into a parking area.

I walked over to the gas station and asked if they had any kind of a container I could put gas into to bring to my vehicle to get it running again. Both the operator and his wife went scrounging around the store and found a container. Then I needed something to hold the safety valve open in the filler. They looked some more and came up with a solution. I filled the container and then brought it back.

These people were so nice and generously went out of their way to help a complete stranger. We talked a little about Orange, how long they’d been here, family. We are strangers no more.

After Hurricane Rita came through town I remember lots of damaged homes; one of them belonged to a very close elderly relative.

By passing the word around through a lot of grapevines someone pointed me towards a family living in a small house that needed a larger one but didn’t have lots of money. Had a good job, but not a lot of money on hand.

We worked out the price and there was almost an even swap – the money he got for his good, but small, house for the bigger but damaged one. There were back taxes to be paid on the new house but they could be paid in installments and that was figured into the budget. As it turned out there were some hidden issues and the county needed twice as much in payments. Too much. I found a private investor to loan him the money and the deal went through. 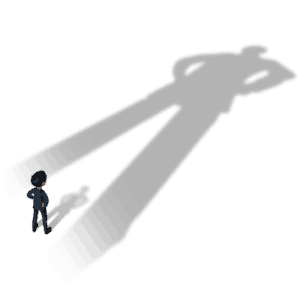 n years later and the family is still there. The house looks better than it had in years. The owner has become my friend; he moved his way up at work and now supervises a large number of his fellow workers. After hurricane Ike, he came over and helped me clean up my property and fixed a downed fence. I was invited to celebrate his daughter’s quinceañera. For me that was a great honor to join his family like that. This man is humble, but to me he is the epitome of honesty, integrity, and goodness. We need more people like him, people that cast a big shadow.

At Art-in-the-Park this year I met a man who had a booth trying to raise interest, and perhaps some money, to start a new museum of local culture and history in Orange. He’s been working on it for a couple of years and it’s taken up a lot of his time. He’s a military veteran and in his late seventies. We talked for a while there and have met several times since at different venues. He strikes me as a genuine good guy. Humble about what he does and who he is, he gives of himself for others, asking little for himself.

A few months ago I went to buy a case of beer on 16th Street. The case price was marked on the rack (a good price BTW) but they had no cases, just ½ cases which were more expensive. When I went to check out, the cashier wasn’t sure she could sell me two halves for the price of a whole case and called for the manager. I guess it was busy because the manager didn’t show up. Rather than keep me waiting, this woman made an executive decision and just charged me the case price…without getting approval. That’s the kind of employee every business should have, one that takes initiative and uses common sense.

What do these people have in common? In a single word, ethics. They have a good sense of right and wrong…and constantly strive to do what’s right, adhering to basic and fundamental principles of decent human conduct. They represent what I believe we do not have enough of – selfless interest in the wellbeing of others and our community.

I not only respect Henry, Nicky, Hector, and the anonymous cashier, I look up to them as models…just everyday folks, except that they are also GOOD everyday folks. They work hard, care for their families and their community. None of them are rich – far from it. Two of them are immigrants, one from South Asia and one from Mexico; one of them is African American.

These are the great people that make Orange a great place to live.

Maybe the people who don’t like it here need to meet more great people like these folks, my heroes.

J. David Derosier consults with small business on planning and marketing issues, and provides web design and hosting services through OhainWEB.com, an accredited business with the Better Business Bureau that is rated A+ by BBB. He can be reached at JDAVID@Strategy-Planning.info

This article was first published in The Orange Leader in October 2015.

Published in October 2015 in the Orange Leader