Do anti-discrimination laws have it wrong?

A few days after this article gets published, I will have another birthday. This is a major birthday. I suppose it could be compared with going through a change of life, but then, that it would be sexist to say that.

Think about it. According to most definitions, being sexist is discriminating against females. And discrimination, by definition, is bad – right?

Somehow in my aging mind, I don’t think that comparing my state of mind to something that a person of another gender might be going through is inherently bad. It’s merely recognizing a unique characteristic of that other gender (assuming there are only two) and respecting it.

Actually, if you go to most dictionaries, you will find a second meaning for discrimination. According to the Cambridge Dictionary, it is “the ability to judge the quality of something based on its difference from other, similar things.”

I guess the English language can be real confusing, eh?

I think our anti-discrimination laws have gotten it wrong. They define protected classes, whose members are protected from any kind of negativity.

Most folks have heard of the phrase “all men are created equal”, as written in the second paragraph of the American Declaration of Independence. Being right at the top usually means its real important. 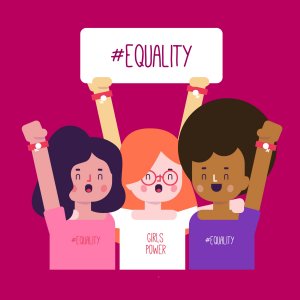 Why not protect ALL classes of people? Why do some need to be protected while others have to fend for themselves? Sounds like discrimination to me.

How did we get here just by talking about having a major birthday? ‘Cause it got me thinking, which is not always a good thing.

Let’s take a look at three current items in the news – and maybe you can ponder whether there is discrimination involved, or whether everyone is created equal, or whatever.

In their regular course of qualifying candidates for the 2020 nomination for office of President of the United States, the Democrats have had 29 candidates, at least 7 considered persons of color. Fourteen candidates have dropped out and 15 remain.

Prior to starting the process, the party set rules for qualifying candidates for the big national debates. The qualifications were based on the candidates demonstrated support -number of donors and public polling numbers. Only seven of the remaining 15 candidates currently have enough support to meet the qualifications for the debates. Only one of these is a person of color.

So, out of 29 potentials, only 7 have enough public support to make the cutoff. Even worse, 6 of the 22 candidate that didn’t qualify were persons of color. Whose fault was that?  The losers, who did not get enough public support, are calling this discrimination. Calling it racist!

What ever happened to treating all people equal? Does being in a protected class mean you don’t have to live by the same rules as the others?

The House of Representatives has passed articles of impeachment against President Trump. One of the charges against him is that he involved a foreign government (Ukraine) in supporting him against a political rival – Joe Biden. The issue of whether or not an inquiry by a foreign official for potential corruption in his own country by an American was justified on its own merits does not count; as a political rival, it appears that Joe Biden is in a protected class and not to be treated equally.

The Special Counsel investigation was an investigation of suspicious links between Trump associates and Russian officials, and Russian interference in the 2016 United States elections. Obviously, it is a no-no for there to be intergovernmental involvement in foreign elections.

In February of this year, NY Congresswoman Alexandria Ocasio-Cortez spoke for 45 minutes on the phone with Jeremy Corbyn, the leader of the UK Labour Party. No transcript of the call seems to have been prepared, however Mr. Corbyn tweeted afterwards, “Let’s build a movement across borders to take on the billionaires, polluters and migrant baiters, and support a happier, freer and cleaner planet.”

In April, they had conversation on Facebook. And this month, just prior to the UK elections, she tweeted, “The hoarding of wealth by the few is coming at the cost of peoples’ lives. The only way we change is with a massive surge of *new* voters at the polls. UK, Vote!”

Perhaps as a woman of color and a Democrat, AOC is in a double-protected class and intergovernmental foreign involvement is OK?

What do you think?

Can you see a distinction between the two definitions of Discrimination? Personally, I just can’t get over the feeling that if we only treated everyone equally, we would be much better off. The good news is, if you agree, you don’t need new laws, just do it.

It’s so much fun getting older.

Merry Christmas to all

This article was first published in The Orange Leader on December 18th 2019.